June 26, 2012
The history of fashion and design is at the center of our work at Compass Rose Design Jewelry and I love sharing the historical moments of beauty and imagination that inspire our designs. This NeoClassical Revival choker made with a late-Victorian button is a direct reference to the jewelry worn the women in Napoleon's life from 1790-1814.

The emergence of fashion as an expression of individuality rather than social class alone was a concept that took form after the French Revolution as the old aristocratic regimes began to crumble and transform. We can understand Neoclassical fashion movement and it's submovements as many other youth style subcultures that emerge in times of social uncertainty and political transition - both embracing and ironically rejecting previous fashion trends. For most of the 18th century, fashion showcased the wealth of the aristocracy with silk brocades, formal lace and layers upon layers of horse hair crinolines for the ladies, which were both hot and unhygienic. This 1796 caricature captures and satirizes this transition:

Royalists, aristocrats and other anti-revolutionaries had been guillotined during the Reign of Terror, and after Robespierre himself lost his head, the Directoire period emerged (1795-1799.  It was in this post-Revolutionary moment that disgruntled artists and youths started to wear extreme and outlandish versions, which became known as Incroyable and Merveilleuse style. Many of these young people were in fact the children and survivors of those beheaded by Madame Guillotine. The inspiration for the hyperbolic Incroyable and Merveilleuse styles comes from two central inspirations; the English country gentleman, adored by the French in the 1770s. For women, the  Classical Roman chiton. Portraits of notable Parisian socialites like Madame Récamier, painted by Jacques Louis David codified Neoclassical sensibilities. 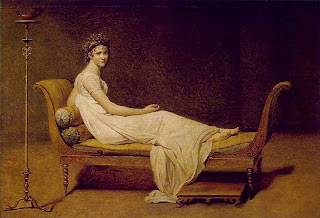 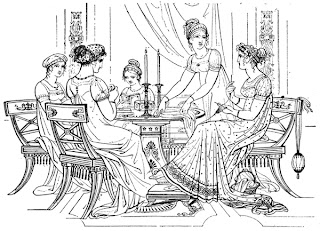 In addition to the sociopolitical transformation of the old aristocratic structure, excavations at Pompeii and Herculaneum in the mid 1750s influenced the emergence of Neoclassical design.  By the mid 1790s in Western Europe, classical images of flowing gowns, carved stone cameos and idealized notions of Greek civilization reached French and English society. Tight-laced corsets were temporarily out of fashion while the women draped themselves in flowing gauzy gowns reminiscent of Grecian statues. These 1790 stays provided some support, while allowing the natural figure to be seen.


Les Merveilleuses, "Fabulous Diva," flourished in the live fast, die young social mentality that took over the salons of Paris after the Reign of Terror. At the center of the Neoclassical fashion moment, we find several significant and colorful women: Thérésa Cabarrus Fontenay Tallien and Joséphine de Beauharnais (later Napoleon's wife) both of whom had narrowly escaped death during the Reign of Terror.

Josephine, was prominent in Parisian social circles and had her daughter, Hortense, educated by one of Marie Antionette's famous tutors and ladies in waiting, Jeanne Campan.  Thérésa, like her best friend, Josephine, gained her power through charisma and choosing powerful lovers. Her salons in Paris were famous and Theresa herself was at the center of  Greek Revival Directoire style fashion that emerged. The à la Grecque style adopted by Thérésa, Joséphine, and Madame Récamier consisted of clingy, flowing classical Greek styles in white muslin and silk, draped with brightly colored shawls and ribbons edged with classical and exotic motifs.

Joséphine de Beauharnais, who was very much involved with the French aristocracy and lost her first husband, a General in the French army, to the guillotine. Through the connections of her best friend, Theresa Tallien and her husband, Josephine was freed after the execution of Robespierre.  Needless to say, these events left a vacuum of confusion into which walked, Napoleon Bonaparte.Though Josephine had two children by a previous marriage to a French aristocrat, she had no more children despite her marriage to Napoleon and affairs with other lovers.

These Neoclassical fashion sensibilities, echoes of an ancient Greek past combined with sensibilities of new European Empire, have never left us. Cameos, empire waists and cascading jewels so flattering with the Neoclassical neckline remain treasured by women everywhere. The emerald and diamond necklace worn in the portrait by Stephanie de Beauharnais is in the collections Victoria and Albert Museum. The emerald drops at the back, added in 1820, can be detached and worn as earrings.
Napoleon's second marriage to Marie Louise, Duchess of Parma, satisfied Napoleon's desire to marry into legitimate European royalty.  Captured by ideas of Empire, Napoleon adorned his crown with ancient Greek stone cameos discovered during excavations in the mid-1750s.
These neoclassical divas have captured my love and attention and inspired a new series of Neoclassical-style designs based on the jewelry of the women in Napoleon's life, including his wives, Josephine and Marie Louise sisters Caroline, Elisa and Pauline from 1795-1814.  We'll be debuting some of these new designs at Unique SF this weekend!!!
The mythic theme used in the late Victorian button in the above necklace was a lasting legacy of Neoclassical themes carried through art and artifact back to France and England through excavations in the late 18th century.
See more of our jewelry inspired by queens, consorts, duchesses and by Compass Rose Design
Come visit Compass Rose Design Jewelry at our summer events!
Find us on Facebook
You are awesome! Show at a 15% discount (use discount code VICTORIA15)